If I were to tell you that a University of West Georgia student recently held a photo exhibition in Atlanta, you might say, “Oh, impressive! A UWG art student had a show in Atlanta!” But you would be only half right. Yes, it is impressive, but you’re a little off base on the discipline. The student I’m referring to isn’t an art student – he’s a business student double majoring in management and management of information systems. 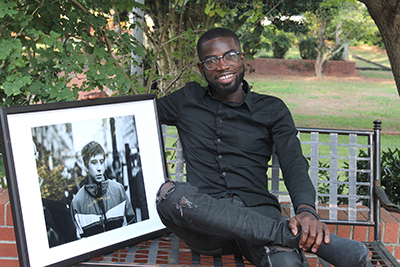 If that raises your eyebrows a little, that’s OK. It raised mine, too, the first time I heard about Adedolapo Adebola-Wilson (he goes by Dolapo). But when I met him, it all made sense. In front of me was a quiet, thoughtful person who carried himself with both confidence and reserve. I could easily see him running a business or peeking out from behind a camera. And, clearly, he sees himself as capable of both as well.

Adebola-Wilson started out as a biology major on track for medical school. But two years into his degree, he decided that wasn’t the right path for him.

“I had to ask myself what I could possibly see myself doing–and it wasn’t medicine,” he recalled, “so I looked at business. I’m glad I switched to business. It’s worked out for me.”

In fact, it’s led to some great opportunities that have not only increased his business acumen but also provided him with some great subject matter for his artistic craft. One such opportunity came this summer, when he studied abroad in Poitiers, France, and earned his certificate in international business.

Prior to his study abroad trip, Adebola-Wilson had been wanting to do a photo exhibit. But he hadn’t decided what he wanted the focus of his show to be – until he went to France.

“Previously, I had done a lot of portraits. But when I was traveling, I found myself on the street doing lifestyle photography because, of course, it’s a different environment,” Adebola-Wilson said.

He wandered around various streets capturing scenes or people that interested him.

“I just wanted to capture human essence and life as it is,” he explained. “A lot of my subjects didn’t even know I was taking their photos, and that’s the beauty of it because nobody is fixing anything, it’s just them being them.”

Before journeying to France, Adebola-Wilson had spoken to Richards College of Business Director of External Services and Programs Simone Lee about the possibility of studying abroad. She recalls he was shy, even a bit timid during their discussion. But she could also see his determination, so she helped him take the steps necessary to join the exchange program through Ecole Superieure de Commerce et Management (ESCEM).

“After he returned from his semester in France, Adebola-Wilson came back to my office to talk and in walked a young man exuding confidence,” she said. “Really, it was radiating out of him! He spoke eloquently and told me how his semester abroad helped him to ‘find himself.’ Chills went down my spine, because it was clear–this was not the same young man who walked through my door last year.”

His new-found confidence led Adebola-Wilson to contact a friend who recently opened a clothing studio and asked if he could use his venue for his first exhibit. They worked together to get everything ready, painting the walls and decorating the space. Around 100 people came out to support Adebola-Wilson’s work, and to his surprise, they were mostly strangers.

“It was surreal. It was crazy,” Adebola-Wilson said. “The support was ridiculous; I didn’t even know that many people would come out. It was genuine love. The part that really stood out to me was when I was speaking to everyone about the photos, and it was like ‘Whoa, these people are really listening to me right now.’”

Adebola-Wilson has admirers on campus as well. His friends and professors are also showing interest in his work.

“Seeing his photos and the passion he has for his photography is heartwarming,” Lee said. “He is conscientious and thoughtful and ready to take on the world. It was a privilege getting to work with him and sharing in his journey. I know his pride in UWG will always remain strong, and I know his experience and education at Richards College of Business will help him achieve great things.”

After the overwhelming support and feedback he received from guests, Adebola-Wilson said he is encouraged to have another show after he graduates in spring. Although, he said he will be a little sad to leave UWG.

“I love being a student here because I get the opportunity to be myself, find myself, and better myself,” he shared. “The great professors and the people here care a lot about me. I’ve made friends with film professors, philosophy professors just by them being who they are. So the environment just breeds that individuality.”