As summer nears its end, the University of West Georgia will confer approximately 750 degrees in its summer commencement ceremony. 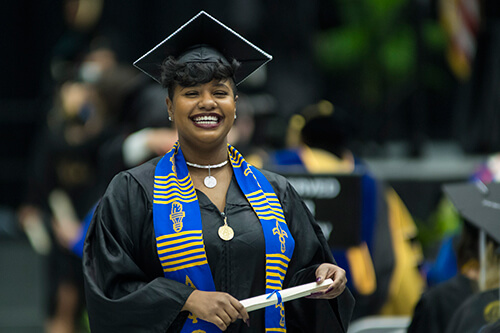 The commencement ceremony will take place in the UWG Coliseum on Saturday, July 27, at 9 a.m. with UWG’s Interim President Dr. Micheal Crafton conferring the degrees and Daniel Jackson, president and CEO of Carroll Tomorrow and the Carroll County Chamber of Commerce, serving as the ceremony’s keynote speaker.

Students from all of the university’s colleges and schools will graduate during the single ceremony.

Jackson – a 1975 UWG alumnus – has worked with Carroll Tomorrow for 18 years and has served as the chamber’s president for more than 13 years. Previous to this time, Jackson spent a large portion of his career in the men’s retail industry. He worked as vice president and partner of the Squire Shop, a popular men’s clothing store, for 26 years.

Jackson found time to take on leadership roles within the community too. He served as charter president of the Carrollton Main Street Program and helped begin the county’s first real estate re-development project, the Courtyard Square. He was also co-owner of Carrollton’s Baskin-Robbins and the Courtyard Cobbler, a local shoe repair shop.

Jackson gives back to UWG through serving on three different advisory boards, including Richards College of Business, Health and Community Wellness, and College of Education. Additionally, he was president of the Athletic Foundation Board and the Alumni Association.

Throughout his diverse career, Jackson has been a point person in Carroll County through church, civic, youth, education, business, health care and nonprofit involvement. He is often asked to facilitate, entertain and emcee for a variety of community occasions.

Jackson and his wife, Carol, reside in Carrollton and have two children and seven grandchildren.