When Spencer Gist was a kid, he had a trampoline in his backyard. He’d flip and flop on it all day, not knowing then that the skills he was learning would enable him to coach a team of cheerleaders to a competitive national stage. 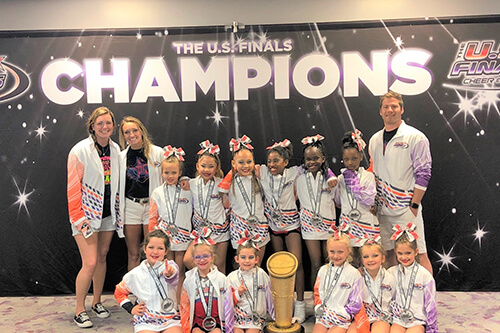 Gist, along with co-coach Sissy Barrett – both of whom are current students at the University of West Georgia – led their youth cheerleading team, the Pro Cheer All Star Peacocks, to the U.S. Finals earlier this year. In competition in Pensacola, the team outscored their competition.

“I love competitive cheerleading and the adrenaline rush you get as an athlete on the floor,” said Gist, who was on the UWG Cheerleading roster for four years in which the co-ed squad won national championships. “But watching our students do well in competition and then come off the mat knowing they’ve done well is, in some ways, even more of an adrenaline rush.”

Barrett, who has also cheered on the UWG Cheerleading team, agreed, saying she’s humbled to have been part of her students’ growth.

“I love watching them develop and grow as athletes,” said Barrett, who plans to graduate next May with a degree in health and community wellness. “They are close on and off the mat. I’ve been in their position and know how excited they are to succeed.”

Gist is studying sport management with a minor in marketing. He also plans to graduate in May 2020 and would like to continue coaching after graduation.

“I’ve always had an interest in physical activity and being able to be in a gym every day is something that really appeals to me,” said Gist, originally from Forsyth County. “I feel like I’m not at work when I’m coaching, so I’d love to start my own gym or help manage an established gym.”

Barrett, on the other hand, would like to continue her studies to become a pediatric physical therapist – a calling she found when her brother was in a car accident several years ago and had to recover with the help of a physical therapist.

“At UWG and in coaching, I’ve learned so much about myself and how to work with younger people,” Barrett said. “I’ve learned to manage my time better, between having a full load of classes every semester and balancing that with a job that requires a lot of my time. I’ve also learned a great deal about identifying the strengths and weaknesses of members on a team and how I can work to align everyone where they are most likely to succeed.”

Gist said his coaching philosophy comes from experience: everything he’s told his squad has been told to him as an athlete.

“I’ve been able to customize some of the amazing advice I’ve received from coaches in my life and apply it to the cheerleaders on our squad in a way they can grasp,” Gist said. “Learning those principles and experiencing that structured mindset at UWG helped me apply that to my work with these young kids.”