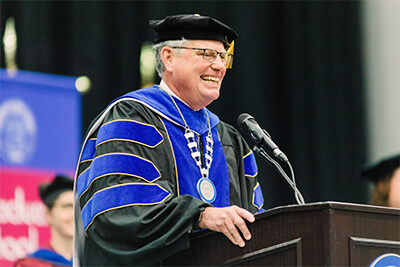 “Graduates, it’s humbling to stand in the presence of your ambition – to stand in the presence of you who are crossing this magical finish line,” said Richards, chair of Southwire Company LLC, during his remarks. “The world has a staggering amount of promise and opportunities for people like you with can-do attitudes and the degree you’ll walk out of here with today. I’m proud of the work you’ve done, and I look forward to following you into the future.”

A preliminary number of 1,302 degrees were conferred, with nearly 1,000 students walking across the stage. Of the degrees conferred, 979 were undergraduate degrees and 323 at the graduate level.

UWG Interim President Dr. Micheal Crafton expressed gratitude for the students who progressed through their educational journey at UWG, the faculty and staff members who nurtured their success and the family and friends who provided support along the way.

"The time the graduates have spent at UWG has given you the opportunity to transform your life, but what it will do for you in the next 50 years will be even bigger," Crafton told graduates before they turned their tassels. "We are truly joined together. Your success in the future is UWG’s success, and when UWG succeeds, the value of your degree increases.”

Khareem Leslie, president of UWG’s Student Government Association, implored graduates to let the world know what it means to be a UWG Wolf.

“Let everyone you meet know who you are, where you came from and what you’re all about,” Leslie said. “Let the power of your knowledge propel you as you continue on your journey. It doesn’t matter how long that journey takes. It’s all about whether you complete it.”

Richards’ remarks centered on his work in environmental efforts, particularly the founding of One Hundred Miles, an environmental advocacy organization that aims to protect coastal land and waters. 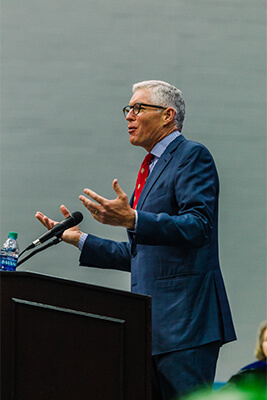 Richards began serving on corporate and nonprofit boards in his early 20s and assumed the presidency of his family’s manufacturing company at age 28. He is chair of the Carrollton-based Southwire, a world leader in the manufacturing of wire and cable.

With his professional experience in general management of companies big and small, and board leadership, he enjoys the challenges and opportunities that come with making all kinds of organizations successful.

“Exactly the same thing is happening today that happened then,” Richards said. “Graduating was the stair-step to a higher quality of life for my father and his family, and it’s the same for graduates today.”

Richards also spoke at the graduation ceremony of the institution known as the State University of West Georgia in 1996, earning an honorary doctorate. In the intervening 23 years, Richards said he’s changed quite a bit.

“I’m more alert to the social and economic merits of UWG and how much it changes lives in our region, state and nation,” he said. “To be able to share a little bit about the world these graduates are walking into – all of its perils, but also all its opportunities – is a humbling honor.”

Richards said his favorite part of presenting UWG’s Commencement address was feeling the almost-palpable joy in the graduates and their loved ones.

“To see the satisfaction on all their faces of breaking the tape and running across the finish line is an incredible feeling,” he said. “These graduates will begin a new race tomorrow, and I want them to know there is much joy to be found in that race, too.”