At first introduction, she’s shy and reserved, but whether she’s in the classroom or on the basketball court, Bre’ana Singleton is handling business. Singleton, a point guard for the University of West Georgia women’s basketball team and mass communications senior, succeeds in her studies by maintaining a 4.0 GPA while continuing her passion of playing basketball. 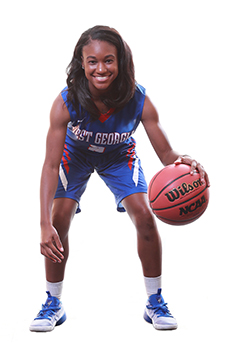 Singleton’s interest in basketball started at a young age when she was inspired by a popular film to play this sport.

“I watched the movie Space Jam, and after that I told my parents that I needed a goal and a basketball,” Singleton said. “After seeing that movie I knew that playing basketball was exactly what I wanted to do.”

Singleton has been a member of the women’s basketball team since her sophomore year. It wasn’t until she arrived to UWG that she finally felt comfortable enough to come out of her shell.

“I went to a really small school during my first year of college, it was very different for me,” said Singleton. “It was three hours away from home, and I had a hard time connecting with people, so outside of my team it was hard to make friends.

“I came to UWG to try out for the team and was offered a scholarship,” Singleton continued. “Ever since then I haven’t been afraid to step out to do something different.”

As one may expect, playing a sport and maintaining a 4.0 GPA can be challenging, but Singleton says it is worth the fight.
“It takes willpower,” she said. “It gets harder during the season, but that 4.0 keeps me going. I want to continue that streak. It’s just the competitor in me.”

Singleton’s concentration in digital media and telecommunications has motivated her to pursue a career in broadcast radio and television. Her interest in sports and communications led her to discovering her ultimate dream.

“I would love to be a journalist on SportsCenter or have my own show, but at the same time I would like to talk about music,” Singleton said. “If I could somehow combine that into one job, that would be amazing.”

For now, though, she’s making plans to attend graduate school to further her education in the communications field. Though she will not be playing basketball professionally, Singleton plans to maintain her academic stamina by earning her master’s degree and focusing on a career in broadcasting.

“As a basketball player, my schedule is very busy, so I haven’t had the chance to immerse myself into radio and television like I really wanted to,” Singleton said. “I believe graduate school will give me the opportunity to advance my skills to succeed in this field.”