The leaders of three local law enforcement agencies announced today the creation of a crime suppression partnership focused on driving criminal activity—including the sale of marijuana and associated crimes—from apartment neighborhoods near the University of West Georgia campus. 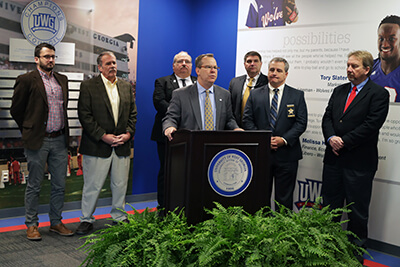 The partnership - which includes the Carrollton Police Department, the Carroll County Sheriff’s Office and university police - demonstrates a proactive commitment to the safety of residents, including students, in those neighborhoods and surrounding areas.

“While the data shows our campus to be among the safest in Georgia, no crime is acceptable,” UWG Interim Police Chief Ned Watson said. “We stand strong in our zero-tolerance policy against any criminal activity on or near university property. We have reached out to our law enforcement colleagues to help us carry out that policy and they have turned out in force.”

Called Operation Protect Our Pack, the partnership includes coordinated surveillance and investigation of activity in the neighborhoods, as well as periodic drug sweeps. The operation is underway and will continue indefinitely.

To better coordinate efforts, Carrollton and university police each temporarily has assigned an officer to the other department, with a senior Carrollton officer serving as UWG’s deputy police chief during the operation.

“This is a unified operation from every sense,” said Carrollton Police Chief Joel Richards. “While we have had mutual aid agreements in place for some time, this is the first time we have come together like this. That shows how serious we are.”

“Dealers are coming from outside areas to conduct their business,” Richards said. “Not only are they dealing, but, with money involved, they are committing other crimes in the process.”

“That’s why joint efforts like this are so important,” said Carroll County Sheriff Terry Langley. “One department may have information or resources that benefit the others. There really is strength in our numbers.”

Law enforcement experts say crackdowns like the local one reduce crime in two ways. They increase the certainty offenders will be caught and punished. At the same time, crackdowns act as a deterrent to possible subsequent crimes by sending a clear message to offenders that this type of criminal activity will not be tolerated in our community.

Research shows drug sweeps not only create short-term reductions in criminal activity, but they usually lead to longer-term decreases. Often, they cause the numbers of other crimes to drop as well.