Rudyard Kipling wrote that 124 years ago, but University of West Georgia Police Chief Tom Saccenti knows it to be true to this day. 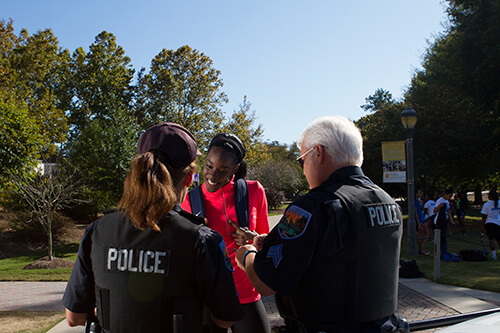 Protect Our Pack was launched two years ago this month. Saccenti, a longtime veteran of campus policing, said he’s never seen a program of its kind. Since its launch, Saccenti particularly applauds two transformational changes.

“First of all, from a purely statistical standpoint, we’ve seen the number of offenses that involve a victim fall by 38 percent since the launch,” Saccenti said. “Additionally, over the past year, we’ve increased the number of arrests made by 13.5 percent. So that’s fewer offenses with more arrests.

“A reduction in the number of incidents is a direct result of ongoing work to ensure a safe and supportive learning environment for UWG students, while supporting safety measures throughout our thriving communities,” Saccenti said.

The second significant change that Saccenti has experienced during his 18 months as chief centers around anecdotal evidence voiced from countless individuals – including his officers – that the campus feels welcoming and safe. This is thanks in large part to the technologies and proactive programs that Protect Our Pack has explored and fostered.

“This kind of evolving progress doesn’t just happen overnight. It’s a collection of smaller efforts that, put together, paint a bigger picture,” Saccenti said. “Since Protect Our Pack launched in 2017, students, faculty, staff and visitors have commented that they feel the power of the pack. Our policing is more visible; our connections are stronger; and our involvement in security and community peace-of-mind has never been more effective. ”

Alyse-Noël Hicks, a junior majoring in mass communications, is one of those students.

Hicks enrolled at UWG in fall 2016, six months before Protect Our Pack launched. Since then, she’s seen firsthand the value the operation offers UWG. She said the partnership with local law enforcement agencies is one all universities should model.

“I love that Protect Our Pack truly brings our whole community together,” Hicks said. “Whether you’re a student, professor or staff member or just visiting, you feel safer knowing that there are brave men and women behind the scenes who are making your campus and community a safer place to live. That’s a great peace of mind to have.”

Hicks said the strength of UWG Police’s communication – particularly through the introduction of the LiveSafe app – has heightened her perception of local public safety officials.

“Not much happens on campus, but I know that if anything does happen, we will be informed on what happened and what we can do to ensure our safety,” Hicks said.

Beyond the LiveSafe app, initiatives invested in by Protect Our Pack’s agencies include the installation of ShotSpotter gunfire detection devices; the hiring of a director of emergency management; and hosting semi-annual town hall meetings in which students are invited to meet with and ask questions of law enforcement officers from university and community police departments.

Saccenti said Protect Our Pack would be much less effective without the partnership and participation by CPD and CCSO, local agencies which support the university police department’s mission and goals.

“This is a unique partnership,” Saccenti said of the collaboration inherent in Protect Our Pack. “We patrol side-by-side with our counterparts from the city and county. That’s not something you see … anywhere, really.”

CPD Chief Joel Richards – who’s led the city police department for 14 years – said he’s proud of the partnership his agency and the sheriff’s office share with UWG Police. A key investment by UWG Police is the installation of an officer on the city’s Aggressive Crime Enforcement (ACE) unit, Richards said.

“I’m proud to live in a city that has a university whose leaders aren’t afraid to roll up their sleeves and get to work on issues facing their community,” said Richards, who’s been a police officer since 1992. “Instead of complaining about it, we decided to do something about it. That’s positively affected the perception – and reality – of life on and nearby UWG’s campus.”

Brad Robinson, chief deputy with CCSO, said it’s the sheriff’s office’s mission to ensure the safety of all citizens in Carroll County.

“And UWG is right in the heart of the county, so we are committed to providing support in any way we’re needed,” Robinson said. “We are excited to be part of the solution by continuing this relationship with the university and our partners in the city into the future.”

Saccenti said he’s proud of the work that’s been done over the past 24 months to enhance the security of UWG – and the community that surrounds the university – by keeping safety the No. 1 priority.

“Over the past two years, we’ve reached beyond standard practices to make our campus among the safest in the state,” Saccenti said. “When it comes to the safety of our students and the members of our faculty and staff, we do not compromise. We will do whatever it takes to protect our pack.”