The University of West Georgia senior, No. 43 on the Wolves football team, has faced a great deal of adversity and change in his 23 years on earth. But none of that matters when he’s sacking an opposing team’s quarterback or causing a fumble. 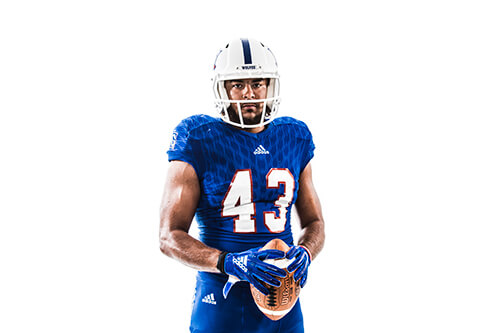 “I love being able to see what the other team’s offense is trying to pull off when we line up to run a play,” said Rogers, describing his passion for his position on the Wolves defense. “As linebackers, we’re involved in everything – making calls, setting the front. We love being sort of the quarterbacks for the defense.”

The Buford native started playing football at the age of 10. For several years, he traveled back and forth between his parents, who were separated. Then his Little League coach, Marty Gildemeyer, came into his life.

“Coach Marty and his son really took me under their wings, and then when I was a freshman in high school, he asked my parents if he could take legal guardianship of me,” Rogers said. “I’ve lived with them ever since.”

Rogers said the great thing about his guardianship family is that transitioning into that family didn’t come at the expense of losing touch with his biological family.

“Even now, when I’m home in Buford, I go see my mom and biological brothers, who live 10 minutes down the road from us,” Rogers said. “So, for me, football is family. I want all of them – biological and guardian – to see me do well. I know they’ll be proud of me regardless of what I do, but I want to excel to give back to them in a way for everything they’ve done for me.”

Now, as a college senior, he’s playing his final season as a student-athlete, and he has plenty of unfinished business.

“This is my third season at UWG, and we don’t have any rings yet,” said Rogers, who originally signed with Clemson University out of high school. “That’s a big goal of mine, to help us bring two rings back to UWG – a [Gulf South Conference] ring and a national championship ring. I think we have a really good chance to do that this year.”

After Rogers graduates this December with a degree in real estate from the Richards College of Business, he’s keeping his options open with the intent to play the game he loves professionally.

“I’m going to keep training and keep putting in the work with the hope to either get drafted or signed, wherever that route takes me,” he said. “I’m going to put my best foot forward into that world, but it’s good to have the safety net that comes with a degree from UWG. You never know how things are going to shake out, but my dream is to play professionally, and I’m working toward that.”

Rogers has proven himself worthy of that job on the field, too. He played in all 12 games for the Wolves in 2018 and recorded a total of 68 tackles, five of which were for a loss. His total solo and assisted tackles all ranked in the top 25 in the GSC, and he was named the GSC Defensive Player of the Week after a clutch interception against West Florida.

Rogers found his way to UWG via an unconventional path, originally signing with Clemson and then transferring to Kennesaw State University with the intent to never play football again.

“I wanted to focus on my career goals and leave football behind,” Rogers said. “But while I was at Kennesaw, I realized I have a God-given talent at football and wanted to make the most out of it.” 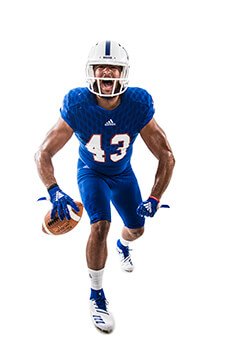 So Rogers visited campus at UWG, where his brother worked as a student assistant in the football program.

At UWG, Rogers has built relationships with teammates, coaches and other students that will last a lifetime.

“No team is ever the same from year to year, and it’s really cool to see all the different leadership traits each senior class has,” he said. “Now it’s finally our turn to get up there as seniors and lead. I can be a quiet guy off the field, but once I’m on the field, I open up and get loud. Being on the field pushes me out of my comfort zone, so I pushed through it and made the field my comfort zone.”

See Rogers and the rest of the Wolves football team howl into action against the Albany State Rams this Saturday, Sept. 21, at 7 p.m. at University Stadium for the program’s annual Friends and Family Day.