There’s only one time when Chad Price is comfortable being the “bad guy.”

“When we don’t have home-field advantage, I love taking the energy out of the crowd,” said Price, who plays defensive end on the University of West Georgia Wolves football team. “I love getting after the quarterback, making the sack or forcing a turnover. Nothing is more psychologically demotivating than that.” 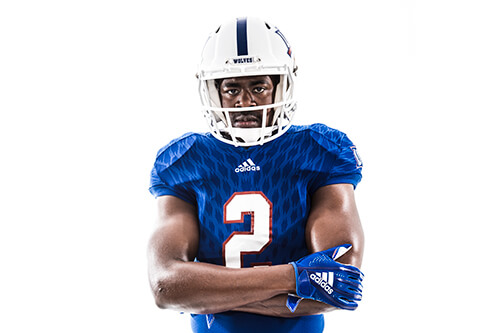 The defensive end – who stands 6 feet 4 inches tall and weighs 255 pounds – played as a redshirt freshman for the Wolves. That was four years ago, and now he’s playing his final season as a college athlete with a legacy to build.

“I’ve followed in the footsteps of a lot of effective, aggressive defensive ends here at West Georgia, and a lot of them have paved the way for me to be where I am today,” Price said. “Now, it’s my time to own it, be the leader they taught me to be and hold my teammates accountable. I want my legacy to be that I’ve always given my all and shown that I care about my teammates in the way I play.”

Price, 22, graduated from Brookwood High in Snellville, Georgia. There were a couple of other colleges on his visit list when he was a high-school senior, but UWG won out.

“I came to UWG, and it felt like home – like it’s where I needed to be,” Price said. “I’ve seen how much this university can do from an athletic and community standpoint. The coaches are tough – and they pay a lot of attention to the smallest details – but I’ve learned so many life lessons in my four years here.”

Price grew up with an older brother and two younger sisters. His brother played football, and watching him play made Price want to hit the field. At age 8, he joined the South Gwinnett Athletic Association and has been playing football ever since.

During the 2018 season as a UWG Wolf, Price started in all 12 games, collecting 38 tackles – nine of which were for a loss – and five sacks. His tackles for loss tied him for fifth in the Gulf South Conference, and his sack total tied him for fourth in the conference. He also had two forced fumbles last year, ranking ninth in the GSC.

Price spent his true freshman season as a redshirt, spending his time working out and learning from two players who eventually would play in the NFL. That wasn't his plan.

“I expected to come in and play right off the bat, but that’s not what happened,” he said. “But now, looking back on that year, that really helped me become the player I am today. I was able to develop a lot of relationships that year and really put my focus on academics. I was kind of embarrassed because I saw it as a missed opportunity, but I just didn’t see at the time that it was the best thing for me in the end.”

After he graduates in December, Price hopes to be drafted by the NFL. If not, though, he has a solid backup plan as an entrepreneur.

“I would love to one day own a creative agency,” said Price, who’s majoring in mass communications. “There are a lot of different avenues I could take with my degree – from being a sports analyst to a video editor – but I’d love to have a space where talented people could come in and my agency would have everything they need for content creation: a full-service business so they can put their talents out into the world.”

That spirit of helping people shine is something Price has always had.

“I love being able to do something that’s bigger than myself,” he said. “I love helping people get to their goals – whether it’s a talented person who wants to share their story or a kid who wants to become a better football player through a lesson I’ve taught at a football camp. I remember going to camps when I was younger, and now time has flown by and I’m on the other side, teaching the kids. It’s crazy.”

But more than anything else, Price said he plays football because it teaches him how to have a healthy outlook on life.

“Football teaches you that when things don’t go your way, it’s all about how your respond,” he said. “If things go your way, do you become complacent or do you keep pushing? Life can force you into different positions, but making the most of situations – putting energy into having a positive outlook – can make you go the distance.”