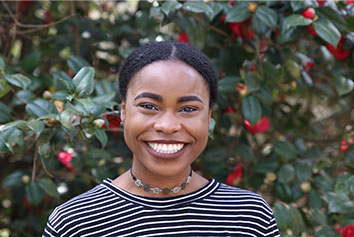 If you were to ask a random group of people to name five famous female scientists, their list may begin and end with Marie Curie. Historically, science has been considered a “man’s field,” and today’s up-and-coming female scientists often find themselves lacking female mentors. For this very reason, UWG senior chemistry major Edidiong Umoren says more women should be driven to chase their scientific dreams – not give up on them.

“I feel women can do anything,” said Edidiong, who goes by “Edi.” “We should feel more empowered. It’s kind of been ingrained in us that men are doing so much in the sciences, but because we need more female figures out there, that should be enough [motivation] for women to succeed in and of itself. There’s so much that we can do, and we shouldn’t feel limited.”

And Edi certainly embodies that motivational spirit. She will graduate from UWG this spring with a bachelor’s degree in Chemistry and head to Auburn University’s Harrison School of Pharmacy to pursue her Doctor of Pharmacy degree. Edi said her goal to attend pharmacy school goes way back and even has family ties.

“Three of my mom’s brothers died very young from sickle cell anemia, so I challenged myself to develop a drug that would stem the proliferation of sickle cells in humans. That’s why I’m really interested in research,” Edi explained. “So when I was applying to pharmacy schools, they had to have research because I want to work on drug development, and starting my research here at UWG prepared me for that.”

Edi, who is originally from Nigeria, says science is a more female-oriented field in her home country. And with a mother who is a registered nurse and a dad who is a mechanical engineer, it felt natural to steer toward a career in the sciences – particularly chemistry and medicine. However, she said she still ran into people who were tempted to underestimate her.

“I knew it would happen because I’m a girl. People won’t necessarily try to discourage you, but they will make you feel like this isn’t for you,” Edi shared. “They’re like, ‘Yeah, a lot of girls major in Chemistry, but how long is that going to last?’ You don’t have to prove anything to them, just show them through your actions. You don’t have to say anything, just do what you need to do, and your accomplishments will speak for themselves.”

Edi said over the years she has looked to her mentors for support.

“My parents were my first mentors. With both of them coming from homes where no one was really pushed to get an advanced education, they had to motivate themselves to succeed. So they truly understood why it was important to motivate me.”

Knowing your family has your back is important in college success, but it also helps to know that someone you’re not related to believes in you, too. Edi had that support as well in the form of friends, such as HaRa Yi, and UWG’s Chemistry professors, Dr. Victoria Geisler and the late Dr. Lucille Garmon.

“My research professor, Dr. Geisler, was a big reason I kept going. She didn’t sugar coat any challenge for me either,” Edi laughed. “She kept me straight without even realizing it, really. She just let me know how it’s going to be, how hard it is to get into a good pharmacy school, and what I needed to do to get there.”

“Looking back, I’m so glad I came to UWG because I could have gone to other universities where it may have seemed like I would have gotten more opportunities, but I know I wouldn’t have had the options and personalized mentoring I’ve had here,” Edi said. “I’m so happy and very proud to be a future alumna. I’ll be a proud Wolf forever!”

And to upcoming students who are just beginning their journey into a STEM field? Edi shared advice that holds true for all students – male and female:

“Sometimes, those first chemistry classes can ‘weed out’ students who aren’t ready for the challenge, but you have to sit up, study hard, find out what study strategies work for you, and believe in yourself. I had to surround myself with people who had that same mentality. So if you are a student who has made up your mind to follow your passion in a STEM field, it’s important for you to surround yourself with people who will influence you in a positive way and know that with support and faith in God, anything is possible.”