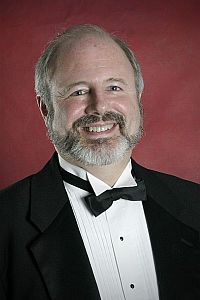 Originally from Pennsylvania, Dr. Hibbard received the Bachelor of Arts in Music degree
from Luther College in Decorah, Iowa, and the Master of Music and the Doctor of
Musical Arts degrees in Choral Music from Arizona State University. He has done
additional graduate work at Westminster Choir College and the Blossom Festival School
of Kent State University. Conductors with whom he has worked extensively include
Robert Shaw, Weston Noble, Douglas McEwen, Howard Swan, Robert Page, Paul
Christiansen, Vance George, and Cyril Stretansky. He has sung with the Atlanta
Symphony Orchestra Chorus and Chamber Chorus, and with the Robert Shaw Chamber
Singers. He currently sings with Orpheus Men’s Ensemble, comprised of choral directors
from across Georgia.

Dr. Hibbard's experience includes public school teaching, church choirs, community
choirs, and boy choirs. He has served as guest conductor for choral festivals in
numerous states, and frequently serves as adjudicator and clinician for vocal events. His
choirs have appeared at conferences of the Georgia and Illinois Music Educators
Associations, and state conferences of the American Choral Directors Association in
Georgia and Wisconsin.

In addition to his work at the University of West Georgia, Hibbard is Choir Director at
Grace Lutheran Church in Carrollton, and Music Director of Collegium Vocale, a select
community chorus that presents concerts of classical choral literature on the campus of
Emory University.

Dr. Hibbard is a past-president of the Georgia chapter of the American Choral Directors
Association, and previously served ACDA as Central Division Repertoire and Resources
Chair for Boy Choirs, and as Georgia Chair for Youth & Student Concerns. He was
recognized as a Friend of the Arts by Sigma Alpha Iota music fraternity for women, and
listed in Who’s Who Among America’s Teachers. Hibbard is a member of the American
Choral Directors Association, the National Association for Music Education, the National
Association of Teachers of Singing, Chorus America, College Music Society, Phi Mu Alpha
Sinfonia, and Pi Kappa Lambda.